I have recently completed a review of the Optoma DV11 Home Entertainment projector. This product integrates a DVD player and stereo speakers into a projector and makes for the type of entertainment system that can be pulled out and assembled, at will, in a living room setting. The perfect screen to complement such a system would be durable, portable and equally easy to pull out and set up. Elite Screens ez-Cinema systems match that description perfectly. What makes this such a compelling product, in the complementary ease-of-use and low price point. With a retail price of just $249 for an 80-inch screen, it is not uncommon to find street pricing around the $175 mark or less 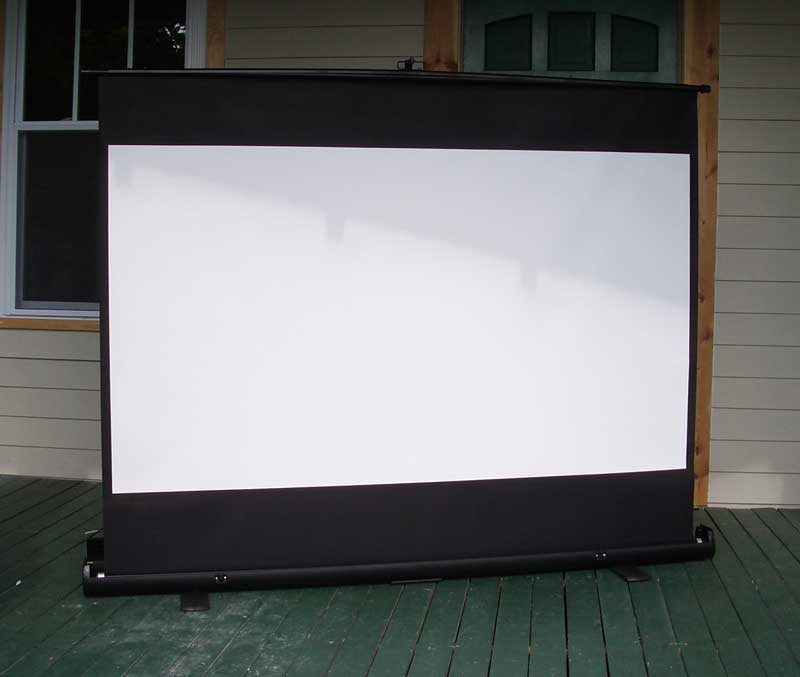 The ez-Cinema system is a very stable screen in terms of the mechanical elements that make up the mechanisms. The case is part of the system – which I like since you can’t misplace it and it doesn’t take up additional space (unless you count the depth, which requires the lid to be opened.) The top bar which lifts and secures the weight of the screen is ingenious. Instead of simply anchoring the lift tab to the top of a ridged bar, the ez-Cinema utilizes a sort of anti-tilt bar that distributes the load across the ends of the screen. This seemed to help the screen rise and sink evenly without allowing it to twist and become uneven over time. 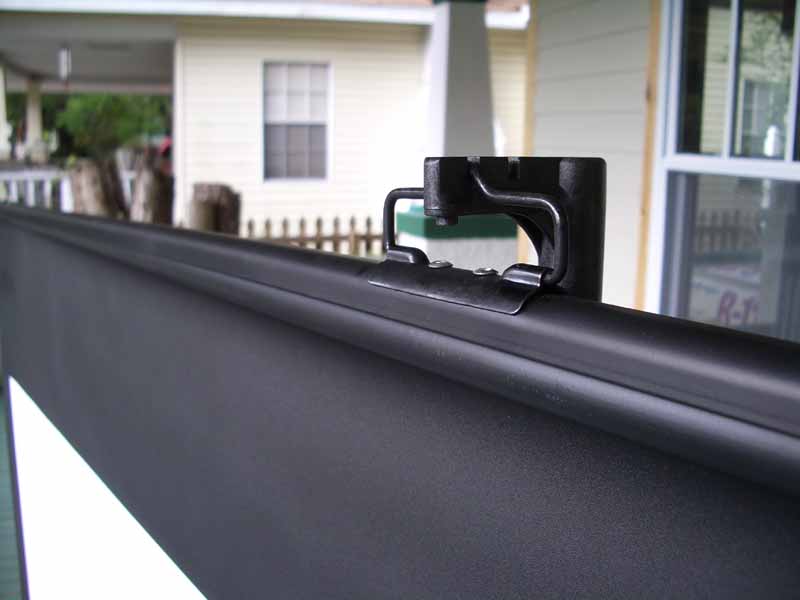 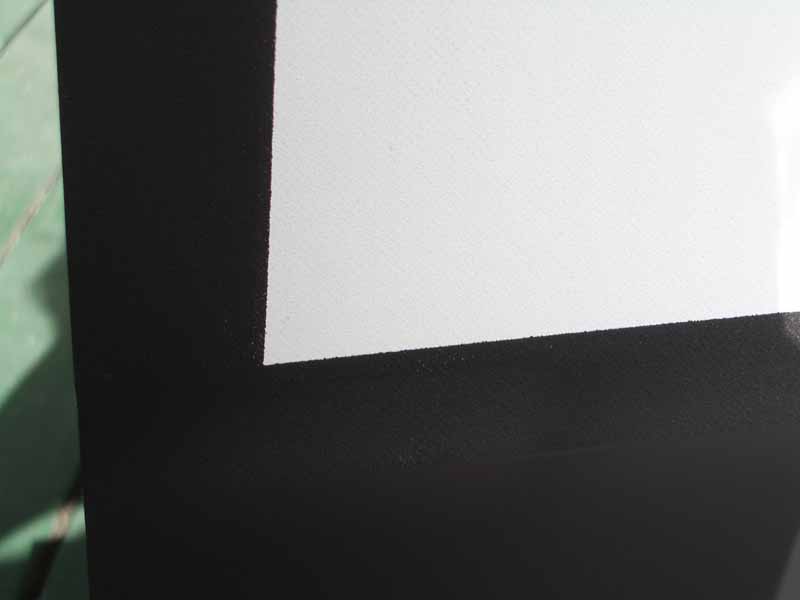 Looking at the Matte White screen material itself, it seems durable – and indeed you can wash the surface with a damp cloth, though for most dirt and dust a soft duster will work wonders. The gain is 1.1 and it has a viewing angle of 100 degrees (50 degrees to either side of center, which is wide enough for just about any practical use. The black 1.25-inch fixed masking around the screen looked to be made well and I noticed no tears or inconsistencies on the front of the screen. The rear looked like some glue had dried in a more randomized manner, but it didn’t appear to be anything other than cosmetic – in an area where it would never be seen except by nosey reviewers.

The case is durable but lightweight. I didn’t feel 100% secure in the twin buckle clasps that adorned the front of the case, locking it closed. A double latch would have been more confidence-inspiring, though the case never once popped open of its own accord. It is possible that larger screens utilize this type of locking mechanism as the online video shows a different style of buckling clasp. When the case is opened the extending height adjustment pole was found locked securely in place behind the screen. The system really does look solid, with parts that aren’t likely to wear out or break over a typical lifespan. I especially liked the ability, however slight to tilt the screen one notch position to manually keystone it to fit the projector angle in the event that you have a slightly off-axis alignment. 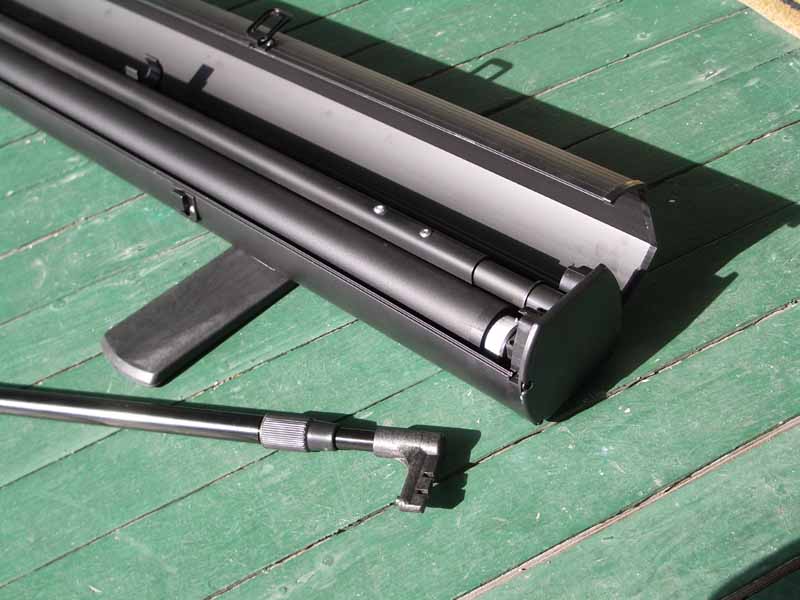 With fixed screens you have a more detailed procedure of assembly and instructions to follow, any one of which could render the screen lame if not followed perfectly. In contrast, the ez-Cinema setup process is akin to popping open a soda can. Here are the setup steps in a nutshell (a very small nutshell):

• Spin out the stabilizing feet perpendicular to the base to ensure the screen system doesn’t topple over when raised up
• Flip up the metal latches and open up the box cover
• Fire up your projector and make sure it is sending a picture that can be visible on the screen during the next few steps
• Remove the support rod
• Insert the square end of the support rod into the support plate located in the middle of the case and adjust the height to where the screen is at the correct height for your projector (ensure the hanging hook is facing forward)
• Lift the screen and place the metal hanger on the support hook.
• Adjust by raising or lowering the vertical support pole as needed – the screen will follow. This is only possible if you can get behind the screen. If not, then make sure you put the screen all the way down before attempting adjustments to the vertical pole (be certain to never let the screen fall without tension.)

The ez-Cinema screen lived up to its name during use, it’s truly easy to setup, operate and put away when finished. The added benefit of low cost of entry make this a product that is hard to pass up, especially if you are on a budget and want a portable solution. When projecting images on the screen we found that darkening the room somewhat was helpful, especially since the Matte White material only offered a 1.1 gain (not raising the image intensity at all during use). While there is a ~1″ side and top mask (with the bottom mask increasing as the screen is raised) light does show up a bit more than on a felt-lined fixed screen. This is to be expected and I did a comparison to show the difference using the same image in the same room with the same lighting:

Looking at the Elite Screens ez-Cinema on the right, you’ll see a slightly more noticeable overshoot when the picture is overscanned onto the black 1.25-inch matte. This wasn’t detracting in the least, but don’t expect to get the same type of light rejection as you would with a fixed-wall felt-lined frame (pictured on the left.) 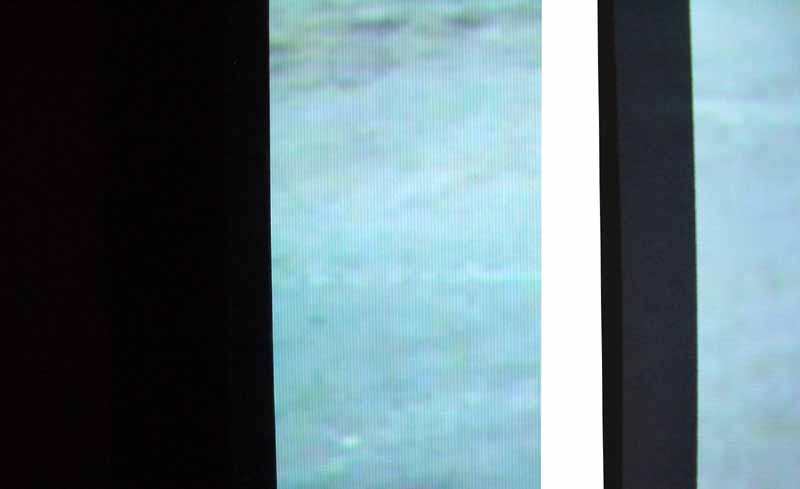 I won’t go into too much detail on the evaluation section. Suffice it to say that the screen performed very well and did not detract in the least from standard or even high definition viewing. I noticed no screen flaws and the screen texturing was unnoticeable from any normal seating distance. I felt that reducing the light in the room worked much better on this screen, however that will also have a lot to do with what type of projector you intend to use. If you are going for theatrical movies, try to darken the room and run the projector in it’s Cinema mode (lower light output). If you are hosting a sports party, then run your projector full-out and know that this screen will only be as bright as the projector can push it. Here are some images I captured during the review: 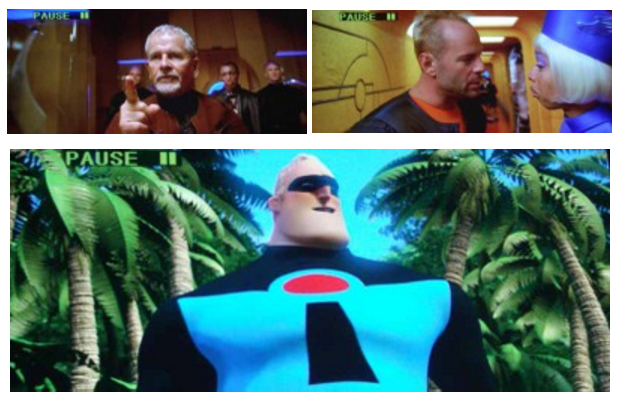 This is a great product. It’s impossible to fault it due to its low price and the fact that Elite Screens has so many more options to choose from should you require more features. For example, if you like the idea of lifting the screen up without the need for an adjustable height pole, then the ez-Cinema Plus’ integrated “scissors-lift” system is for you at just a tad bit more. My only request would be that Elite Screens would add additional screen material options to these products. I would love to see a 1.3 or 1.4-gain screen in this model line-up, especially for a likely target market of consumers who may not have as much flexibility in reducing light in their viewing rooms. Overall this is a MUST-have product for anyone who would like a portable screen that can be put up quickly – and put away when not in use. For the price, you simply can’t beat it.

The scoring below is based on each piece of equipment doing the duty it is designed for. The numbers are weighed heavily with respect to the individual cost of each unit, thus giving a rating roughly equal to:

Audioholics.com note: The ratings indicated below are based on subjective listening and objective testing of the product in question. The rating scale is based on performance/value ratio. If you notice better performing products in future reviews that have lower numbers in certain areas, be aware that the value factor is most likely the culprit. Other Audioholics reviewers may rate products solely based on performance, and each reviewer has his/her own system for ratings.

About Elite Screens: Elite Screens Inc. is a California based company that specializes in making quality commercial and home-theater projection screens for the retail and custom install sales channels. Our company began as an innovative venture into the projection market by manufacturing veterans from the AV/IT industry. Elite Screens quickly established itself as an entry level commercial and home theater screen manufacturer. This was accomplished by making a quality product cost effective with a focus on mass-producing screen material, sizes and aspect ratios that were most commonly preferred by AV customers in general. We avoided custom made products in favor of uniformity that would match the mainstream demographic while including extra features that are not usually included by other manufacturers. We stand behind our customer satisfaction and are so confident in the quality of our product that we offer a 2-year manufacturer’s warranty over the industry’s standard 1-year warranty.