When designing and building my new showroom theater over four years ago I knew I wanted to showcase an acoustically transparent screen to my clients. As a custom installer I have access to many brands, but I liked what I was hearing about Elite Screens so I decided to purchase a 120” ezFrame AcousticPro1080 screen. That screen hung proudly in my showroom and over the years led to numerous Elite Screens being installed for many satisfied clients. I had made the right decision. 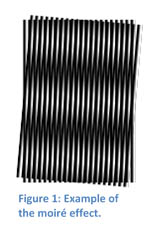 The day finally came for a new projector. I replaced my 1080p Sanyo for a newer 1080p Epson model but I now had the dreaded moiré effect. This happens when two grids are overlaid at an angle or when they have slightly different mesh sizes causing what most refer to and see as wavy lines. It does not always happen, but my new projector’s pixels and the screen mesh where not good partners. Figure 1 shows an example of what moiré can look like.

So I called up my wonderful sales representative Brenda Rocha and shared my dilemma; she promptly put me in touch with David Rodgers, Marketing Manager, who also kindly listened to my sad tale. They informed me that I had an early production run of the AcousticPro1080 material and that subsequent runs of the material were altered a few degrees to help eliminate this problem. During our conversation they shared that they had this new AcousticPro-4K material that would solve all of my problems and they were right.

The Peregrine AcousticPro-4K series falls under Elite Screens customer installer line called Elite Prime Vision or simply EPV. I chose a 120” fixed frame screen to replace my existing ezFrame, but sizes range from 84-345” in the 16:9 HDTV format. The Peregrine features a 3.5” aluminum frame that is wrapped in black velvet.  The 4K in the name means that this screen can be used for high resolution (4096 x 2160) projectors and has a reported gain of 1.0 to 1.1 depending on your viewing angle. The material has a super fine (0.01mm) micro-perforated texture that allows the sound to breathe or be transmitted through the fabric with minimal attenuation, but I’ll get into that later. Other screen material options include CineWhite, CineGrey, PowerGain, WraithVeil, and Elite’s other acoustically transparent screen material AcousticPro1080P2 (also great for 1080p resolution projectors). 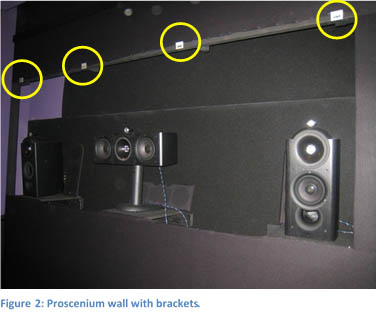 Installation took less than an hour. I assembled the frame, stretched the material over the back, inserted the tension rods, placed the tension rods into the frame groove, and then inserted the small plastic tabs to hold the screen in place. Finally I placed the acoustically transparent black backing material onto the push tabs that are held in place due to their handy Velcro. The black backing helps eliminate any light loss when using acoustically transparent material. I then attached the center bar support to keep the screen taut. The great part is I ended up using my old (and still the same design) mounting brackets from my ezFrame screen to hang it on my theater’s entirely acoustically transparent proscenium wall (see Figure 2). 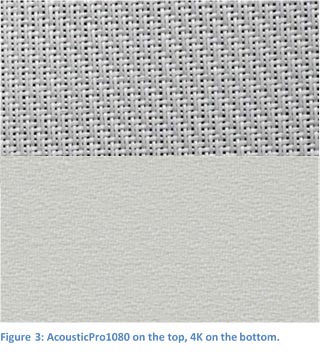 Figure 3 shows a screen shot I took of the two screen materials from the same viewing distance.

To give you an indication of when the perforations can be seen with the visible eye; I could sit at 6-8 feet and see the perforations on the AcousticPro1080 but had to get within about 12 inches to even begin to make out any perforations on the AcousticPro-4K. The frame is more substantial on the Peregrine (3.5”) than the ezFrame (2.36”), which this reviewer believes gives it a slight edge in overall look and appeal. But what does it look like with an image thrown at it and how does it impact sound quality? Well let’s find out.

The screen is up (figure4), the equipment turned on, let’s dim the lights… 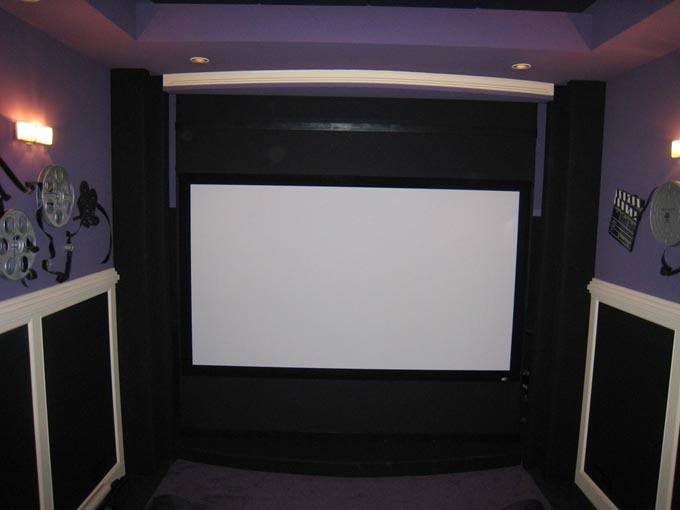 Can you hear it?

Where are the speakers? That is what many clients ask when coming into the demo theater. Then the very astute will ask, does it sound any different with speakers behind the screen? I tell them that the very good screens do not alter the sound but may have an ever so slight effect on overall SPL or what most folks simply call volume. Let’s find out how the AcousticPro-4K screen did in that department. 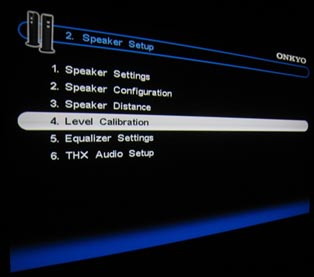 My Onkyo processor has Audyssey MultEQ® XT (figure 5) for automatically calibrating speakers, so I decided to run that processing with the AcousticPro-4K screen both off and on my proscenium wall. The results in the speaker level settings showed that there was a slight boost in the front three speakers by 0.5 to 1.5 when the screen was installed. What this tells me is that the processor was adjusting the front three speakers to equalize them to the surrounds and subwoofers. But what did this equate to in dB loss, if any? My SPL meter may tell us.

I ran through the same tests as before, without and with the screen, but this time holding my analogue SPL meter in the primary listening position. I calibrated the front three speakers to 75 db without the screen. Then I put the screen up and fired everything back up again. Ensuring I was listening at the same level on the Onkyo, my SPL meter fluctuated between 73 and 75 db; the red bar dancing slightly back and forth (I really need to get a digital meter). This confirmed to me that the screen is impacting the front speaker array by 1, possible 2 db, and why the Audyssey calibration boosted the front speakers as well.  1-2 db is minimal loss at best and something I can live with by the use of simple gain control. 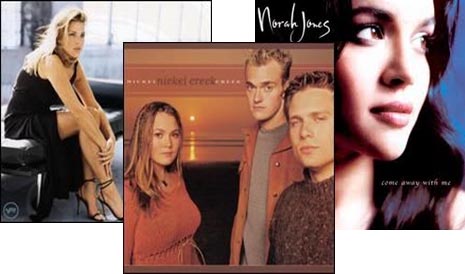 I also listened to some of my reference audio tracks from Nora Jones, Diana Krall, and Nickel Creek (figure 6) to see if the actual musical presentation was impacted. I heard no coloration of the sound on any of these albums and I know their tracks very well. In short, with and without the screen, sound quality did not change.

With the AcousticPro1080 screen I could see the moiré effect on the warm-up logo screen after turning the projector on, but the first thing I noticed with the new AcousticPro-4K was, well, nothing! With that annoyance fixed, thank you Elite Screens, I calibrated the projector again and ran the screen through my favorite Blu-ray demo and a few DirecTV HD shows to test color accuracy, contrast, and brightness; as well as overall picture quality.

I started with Avatar Extended Collector’s Edition; I’ll be honest it’s my default demo due to its fine detail and crisp and vivid color palate (figure 7). I immediately noticed an increase in the films fine detail going from the AcousticPro1080 to the AcousticPro-4K screen. Whether it was the feathers or beads the Na’vi’s wore, the AcousticPro-4K screen rendered them with more “pop.” The notes I took during the movie read; eye-popping detail, depth (but it’s not 3D), lush and accurate green leaves and bright yet precise orange-red bursts of fire. Live action scenes had a “smoother” appearance to them, again I believe due to the smaller perforations in the screen as well as the removal of the aforementioned moiré. I was just as impressed with the deep black levels and contrast, which the AcousticPro-4K screen rendered with slightly more depth than the AcousticPro1080.

As with my experience watching Avatar, watching a variety of shows on ESPN HD or HDNET the picture was detailed, vibrant, and crisp. If you throw a great or amazing HD quality picture onto the AcousticPro-4K screen, it will throw right back at you a great or amazing picture. 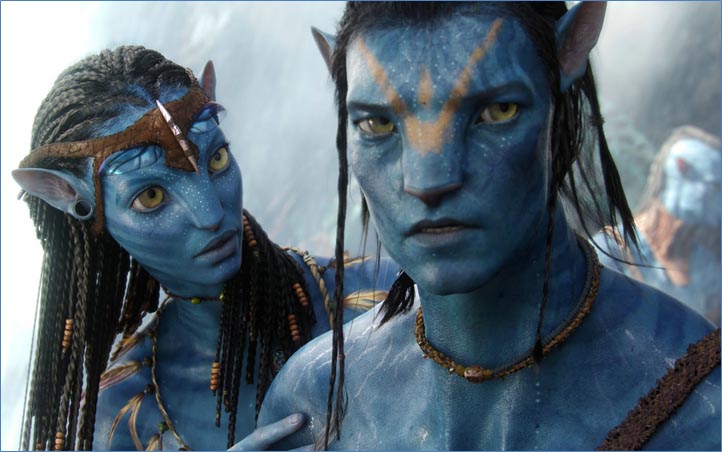 My theater has three rows of seating; the first about 8’ from the screen, second at 12’, and the third about 16’, but no matter what row I sat in for this review the picture was stunning. I will admit that I stayed away from the first row because I could begin to see the screen perforations on the AcousticPro1080, but with the AcousticPro-4K I can now visit the front row and not be bothered (though I still prefer my sweet spot in the middle of row two).  Color was uniform from left to right, top to bottom, with no hot spotting; which showed me the screen material was manufactured with quality and performance in mind.

The only thing left to do now is sit down, fire up your favorite movie, and enjoy the show. With the Peregrine AcousticPro-4K’s high resolution (4096 x 2160) capability I’m set for my next projector upgrade and I won’t have to worry about moiré or really anything else for that matter! The AcousticPro1080 served me well for many years and no doubt continues to be a great budget option for many folks wanting to wonder into the acoustic transparent screen game. But for those who want the ultimate in acoustic transparent screen performance the Peregrine AcousticPro-4K is your answer. I’m also pretty confident that this new screen will continue the tradition of helping to encourage Elite Screens to be installed in the homes of many satisfied clients in the very near future. 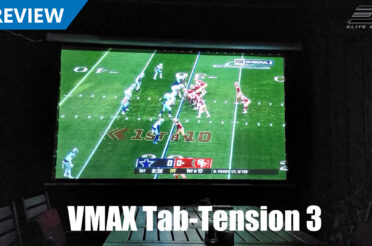