Elite Screens has developed a reputation for providing low-cost solutions for a multitude of projection screen needs.  This includes manual and electric pull-down screens of a variety of shapes and sizes, as well as fixed frame, whiteboard and portable screens.  Not stopping there, Elite Screens determined that there are conference room and home theater applications where a ceiling or wall-mounted screen is not practical.  The result was the creation of a new group of electric floor-rising screens, starting with the Kestrel screen series.

Available in sizes from 72” to 103” diagonal (16:9 or 4:3 format), the Kestrel uses Elite’s CineWhite screen material rated at a gain of 1.1.  The Kestrel has a variety of control options available and comes with everything you need to take advantage of those options.  In addition to the usual simple IR remote, the Kestrel also comes with an RF remote and an IR learning universal remote that allows you to control 7 other components in addition to the Kestrel.  Our review unit was a special 80” diameter model, which is not one of the standard models, so the specifications listed below apply to the 84” model.

Elite is known as a price vs. performance leader in the industry and the Kestrel is yet another product that fits into that category. 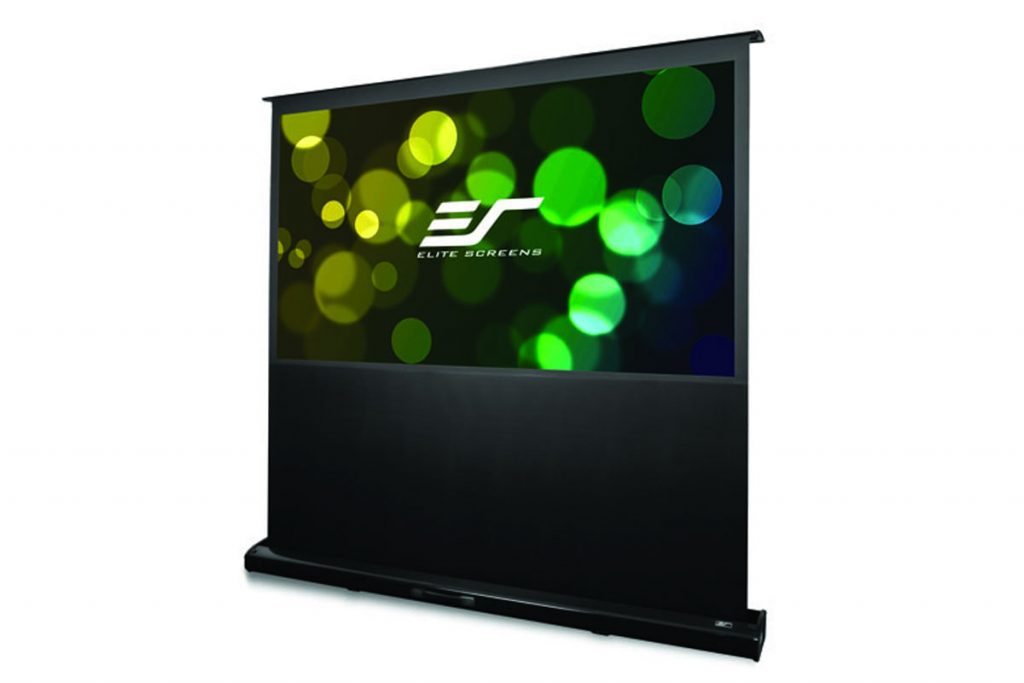 Appearance
The Elite Screen Kestrel is housed in an attractive gloss black metal case.  It has a substantial handle that is perfectly placed in the center so there is an equal distribution of weight on each side of the handle.  This is critical because the Kestrel, being long, narrow and weighing in at over 50 lbs., is not particularly easy to move.  Fortunately, unless the weight is a problem, the handle makes it easy to carry the Kestrel from one location to another.  The handle is also on the front edge of the screen case, so when it’s placed in position, you know the screen surface will be facing in toward the handle.

Once positioned, there is a plastic door on the left end of the screen case that is opened to reveal the 6’ power cord, which is coiled up inside.  Also, in the compartment is an RJ-45 jack, which, when connected via CAT5 cable, allows you to extend the IR receiver, connect to a wallbox switch or activate the screen via a 5-12V trigger.  On the top of the screen case, also at the left end, is a master power switch and below that, an IR receiving eye.

Normally, we’re just talking about a single remote control for the product being reviewed.  However, in the case of the Kestrel, there are a number of included options to raise and lower the screen.  First, there are two identical-looking remotes to control the screen.  One works via IR (infrared requiring a line-of-sight between the remote and the screen) and the other works via RF (radio frequency which works through walls and a greater distances).  These remotes have buttons to raise, lower and stop the screen at any height.  Also provided is a universal IR remote that allows the user to control not only the screen, but seven other components as well.  This remote has an LCD screen and glow-in-the-dark buttons and can learn commands from remotes for components that are not in its built-in database of commands.  If that’s not enough, a wallbox-mounted remote pad is also included.  By running a CAT5 cable from the wallbox to the RJ45 jack on the screen, the user now has a wall-mounted solution to control the screen.

Not really a remote control per se, but also included in the package, are RJ45 connectors to allow a 5-12V screen trigger to activate the screen and an IR eye extension that allows you to use an IR remote with the Kestrel, even if the base is hidden.

Once it’s set in place and plugged in, the Elite Screens Kestrel rises smoothly into position when the “Up” button is pushed.  The mechanism uses scissors-style (think car tire jack) steel parts to raise and lower the screen, which is unrolled from a tube inside the case.  The top cover of the case has the screen attached to it and the scissors raise it into place.  Operation is fairly quiet and the screen rises to its full height in less than 30 seconds.  The screen can be stopped at any point during the raising operation.  If opened fully, there is a 32” black drop below the screen surface.  This puts the screen at the proper height for viewing when seated.

It should be noted that the drive motor has an overheat protection sensor.  If the screen is consecutively raised and lowered within a 3-4 minute period, the motor will automatically shut-off to prevent the motor from overheating.  If this happens, the user must allow 30 minutes cool-down time before resuming operation.

The Kestrel’s CineWhite screen is listed with a gain of 1.1, which is typical for a matte white screen.  I compared it with my Carada Brilliant White screen, which has a listed gain of 1.4, but has been measured closer to 1.3.  Taking readings of a 100 IRE (white) screen on both, the CineWhite material came in at about 1.12, which puts it right at its rating.

I then measured a 100 IRE (white) window both from the projector and the screen for the balance of red, green and blue components.  The Kestrel displayed an increase in blue (not unusual for many white matte screens) of about 3%.  This is not excessive and a full screen white field did not have any blue tinge to it in the projector’s THX mode.  This shift toward blue was slightly more noticeable using one of the projector’s brighter settings, which tend to overemphasize blue anyway.  By comparison, my Carada screen (which is one of the more neutral ones out there) actually has a reduction in blue of about 1%.

Overall, the slight blue shift of the Elite Kestrel can easily be accounted for during calibration, such that the resulting image will look no different than it does on the Carada.

The screen uses the cord-type tensioners normally found in motorized wall screens.  These cords are attached via loops at various points along the screen’s height to keep horizontal tension on the screens, thus minimizing any distracting “waves” in the screen surface.  While our test unit still had a few small waves along the top edge of the screen, it wasn’t noticeable in normal viewing and will likely tend to smooth out further the longer the screen remains fully open.  I also saw one of the non-tensioned Kestrels and it had some noticeable (albeit small) waves in the screen surface.  For that reason, I would highly recommend paying the extra money for the tensioned version, especially if the screen is going to be used for a home theater.

Placing the Kestrel in front of my wall-mounted Carada Brilliant White screen for comparison, I fired up my Epson 8500UB and projected a full screen image.  The Kestrel did a fine job with a variety of Blu-ray material, both movies and test disks.  The CineWhite screen material had a very natural appearance and under normal viewing the slight leaning toward blue was not noticeable.  Overall, the Kestrel screen did not noticeably appear to favor any particular color.  There was no noticeable grain or other visible indication of the screen surface and the few aforementioned waves one the top right edge of the screen surface were a non-factor.

The Kestrel displayed a bright, clean image from any normal viewing distance.  As you would expect from what is essentially a neutral gain screen, there is no hot-spotting and the viewing angle was quite wide.  I’m not sure you’d want to watch it at the extremes of its claimed 160 degree viewing angle, but it’s just fine at the normal limits of 120 degrees. 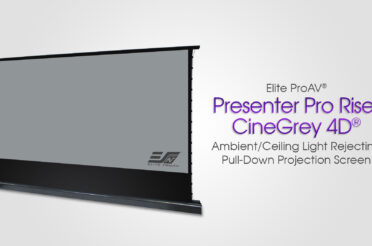 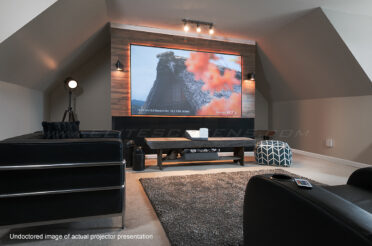 Looking for an affordable high-performance CLR or ALR screen for your UST Projector? The Elite... Read More 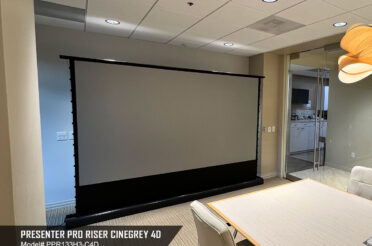 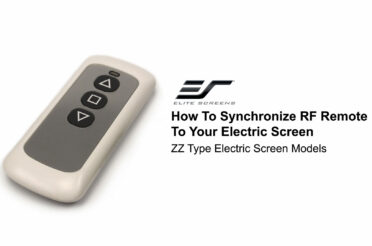 See this instructional video on how to sync RF remote to your electric projection screen.... Read More 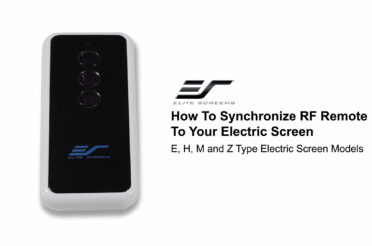 See this instructional video on how to sync RF remote to your electric projector screen.... Read More 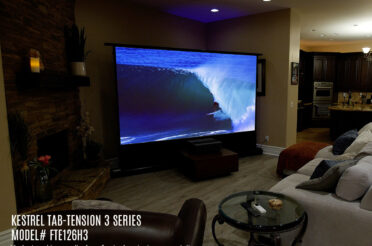 The Kestrel Tab-Tension 3 is an electric floor-rising projection screen that is an attractive centerpiece for home... Read More 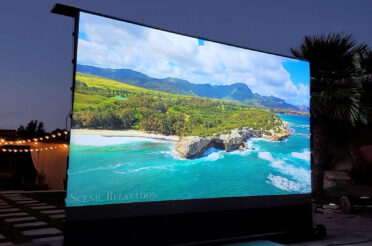 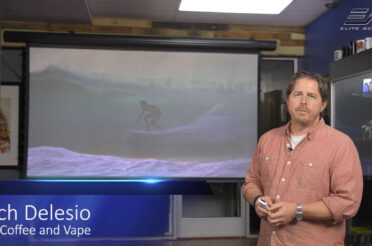