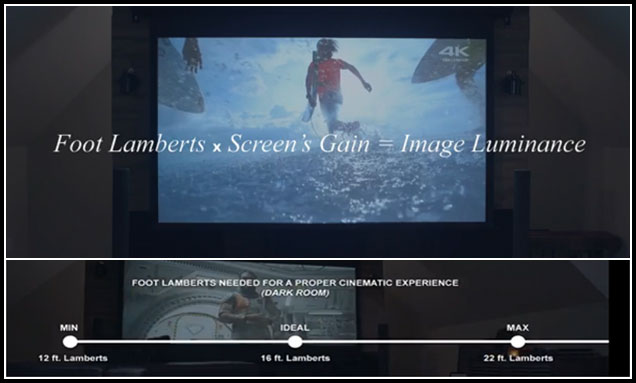 Arguably the most important element of creating a great projected visual display is in the combination of a projector’s brightness and a screen’s ability to adequately reflect light.  The overall result is known as Image Luminance.

Simply put, if you want a good projected image, the image needs to be bright enough to be easily seen.  It sounds simple enough but there are various rules of physics that must be followed in order to get that perfect image.  In order to successfully acquire the right projector an projection surface, you need to be familiar with these basic concepts:

When these four basic elements of the equation are identified, the next step is to understand the basic properties of each as well as how we can calculate these variables into creating  a projection system that best works for you.

*Note: To get it in plain English, read the blue text.

The American National Standards Institute (ANSI) averaged multiple readings of visible light from various angles to determine a standardized unit of measure known as ANSI Lumens.  Lumens are the units of measure for the amount of light that a projector is reportedly able to produce.  More specifically, it is a measurement of light intensity as specified by  the International System of Units as “a unit of luminous flux equal to the light emitted in a unit solid angle by a uniform point source of one candle intensity”.Mathmatically, it is a measurement of one candela of visible light per squared radian  (1 candela * sr) Symbol = lm.

To put it into easier perspective, a candela is about the equivalent of the light of one candle.  The candela  actually replaces the obsolete measurement of the “Candlepower (cp)” and is equivalent to 1.02 cp units of measured visible light.

Foot Lamberts are the measured brightness of a projector’s output spread over the surface of your projection screen. Its standardized measurement was established by the Society of Motion Picture & Television Engineers. SMPTE as they are more commonly known developed a standard for determining the amount of light necessary for proper cinematic playback in a darkened room.

Why Foot Lamberts are Important 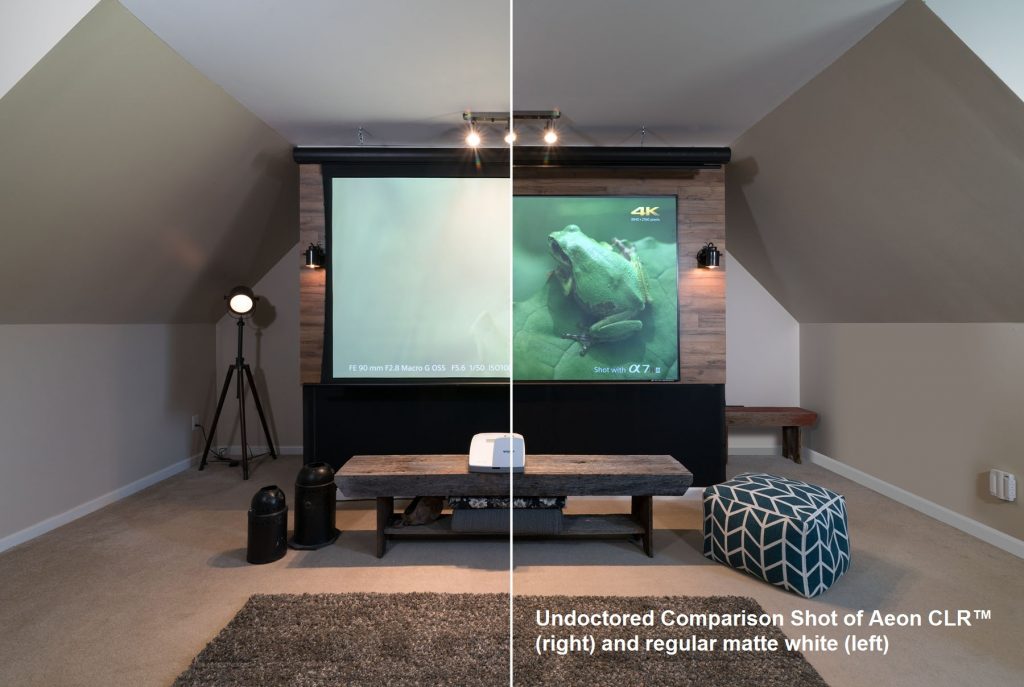 Since foot lamberts essentially describe the projector screen’s brightness, it is important to know how many foot lamberts are needed to get a clear, visible projected image in a darkened room.  For that matter, they are also essential to determine how much more brightness would be required with the presence of ambient light as well. As seen in the left-hand side of the picture, ambient light can wash out an image if the overall luminance is insufficient.   While using the same projector and a more reflective surface on the right-hand side, the projected image is clear and easily visible.

When projecting in a room with ambient light, it is recommended that 50 foot lamberts should prove ideal but be prepared to increase or decrease output as home lighting levels tend to vary.

Image luminance is found by multiplying the Foot Lamberts times the projection screen’s reflectivity or gain. The image luminance is the overall image brightness created by the combination of projector output and screen reflectivity.  Projection screens vary in their reflective properties.  The reflective neutral matte white screen is typically 1.0 gain but can vary as high as 1.4 in its reflectivity.  Negative gain projection screens are designed to enhance contrast levels at the expense of having less reflectivity. They are typically measured between 0.5 to 0.9 gain. Ambient Light Rejecting or ALR projection screens typically perform in the realm positive gain, or anything higher than 1.0 to 1.8 gain.  These screens are known for superior brightness and image saturation, however they can also be negative gain as heavy contrast layers are incorporated to enhance darkness levels for superior image quality

How to Calculate Foot Lamberts 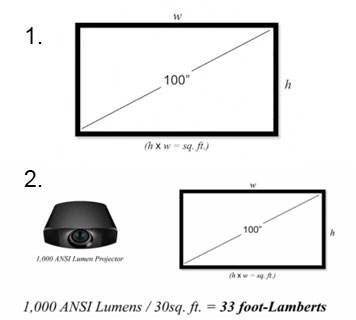 Step 1. Determine the area of your projection screen

Step 2. Divide your projector’s lumens by the screen’s area from step 1.

Whichever sceen you have, find out what its gain is and then multiply it times the foot lamberts calculated from step 2.  Pretend the examples are for 100” 16:9 screens

Determining which Screen is right for you.

The table below presents a hypothetical model for a 1000 lumens projector used with variable screen sizes from 100 to 200 inches and a variety of reflective materials.All the numbers are estimated to give an approximate measurement.

The chart below demonstrates that 0.5 to 1.0 gain material on a 100” (16:9) projector screen will have acceptable screen luminance for use with a 1000 lumens projector in a darkened environment.

This next chart demonstrates that a 1.5 gain material on a 100” (16:9) projector screen is required to achieve acceptable screen luminance using a 1000 lumens projector in brightly lit living that will require about 50 foot lamberts.

The formula is simple.  You need a certain level of screen brightness to present superb picture clarity and it corresponds directly with the amount of atmospheric light that you are presenting in.  The factors of projector brightness and your screen’s ability to adequately reflect light are key in helping you get the big picture.