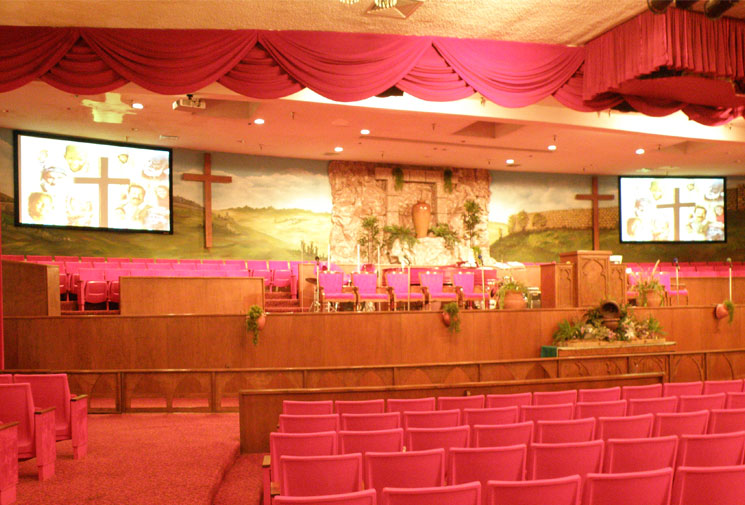 Q. What are some of the most common mistakes you see made in selection of, position of, mounting of, or anything else relating to projection screens, in the House of Worship market? And for each listed, what should have the church done instead?

I have seen a lot of church installations that were so focused on putting up a projected image that they forgot all about the aesthetic value and its importance to the members of the congregation.  Regardless of it being a classroom, Chapel or Sanctuary, installing a projector and its screen the right way is crucial to the visual appeal of the room. Poorly planned and sloppy installations are a pet hate of mine and they have made their mark on far too many houses of God.

Solutions to these mistakes

Q. What are some of the latest improvements in screen technology that would be of interest to the House of Worship Market?

Q. What should a church be thinking about with regards to projection screens for this type of venue?

There is a strong advantage of the video venue especially in larger congregations. Often times, the pastor/speaker is too far away for the average viewer.  Putting the pastor/speaker’s face up on a screen makes the experience more personal by allowing his/her face to be seen.  The congregation gets the satisfaction of hearing the word in person and seeing the speaker’s face during the message.

Video is a valuable element in any type of modern presentation.  It allows the congregation to see the speaker with clarity and it allows them to see visual aids.  People can relate more to pictures than ever before. A congregation can make up for the dearth of a good high-dollar video system by acquiring an entry-level projector and a portable screen.  Both projector and screen can be acquired for less than $500 each.  The media player  can run off a laptop that links easily into the existing audio system. This is a non-invasive solution that  will not impact the architecture of the church and is very cost effective.

Q. What else would you like to tell churches with regards to video screens?

The people of North America are a media-culture. We understand big-screen presentations.  We like pictures.  Telling about Paul’s travels  or Christ’s time in the Wilderness can be better illustrated by a visual representation.  I endorse a good audio-video system as essential to the house of worship community.