High in the hills overlooking downtown Los Angeles stands the iconic Griffith Observatory. The Observatory’s staff approached Elite Screens with a need of an outdoor projection screen that handles easy and could be stretched upon an improvised framework they made for an upcoming event.  They chose a large 236” DIY Pro outdoor projection screen that would give thousands of stargazers a big picture of the Red Planet in all its glory. The orbits of Earth and Mars would bring both planets very close to one another by a distance of 35.8 million miles; pretty close in planetary terms.  The atmosphere was festive and legends like Buzz Aldrin addressed the crowd.  Hundreds of enthusiasts thronged for a good view as the observatory’s main telescope fed its image through to a projector standing before the large DIY Pro 236” outdoor projection screen.

A hush rolled over the crowd as Mars came into focus. First it seemed to be a big ball of white light, but as the telescope zoomed in, details became clearer and our sister planet came into full view as gasps of delight rose from hundreds and then thousands of voices. The best word for the evening is “magical”. It was a beautiful evening filled with interesting people standing in awe of nature’s wonder. With a bright, clear image, the 236” DIY Pro screen allowed thousands of passing enthusiasts to see something that will be a cherished memory for the rest of their lives.

For four hours, beginning on Monday night, July 30, at 10:00 p.m., Griffith Observatory provided a rare opportunity for visitors to see the planet Mars at its closest. On that evening, Earth and Mars were 35.8 million miles from each other, the closest that they have been since the historic 34.6 million-mile close approach in August, 2003.

By a celestial coincidence, at the same time, Mars will be at its very best position for viewing through a telescope from Los Angeles, as it crosses the meridian and appears highest in the southern sky. The next similar close approach won’t happen until September 11, 2035, when Mars will be 35.4 million miles away. 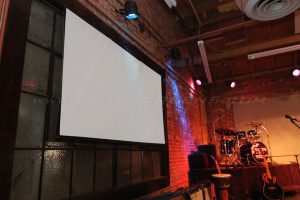 The DIY Pro Screen is the newest outdoor do-it-yourself movie screen. It includes professional black masking borders to improve picture contrast and absorbs projection light overshoot. Enjoy your favorite movies outside using our DIY Pro Screen, which allows installation anywhere a support structure is found. The material allows a clear and sharp presentation without image fidelity loss as typical bedsheets do. The DIY Pro Screen is a professionally engineered yet cost-effective solution that eliminates all of the problems encountered when trying to project on regular sheet fabrics. Don’t settle for less and project on a DIY Pro Screen.